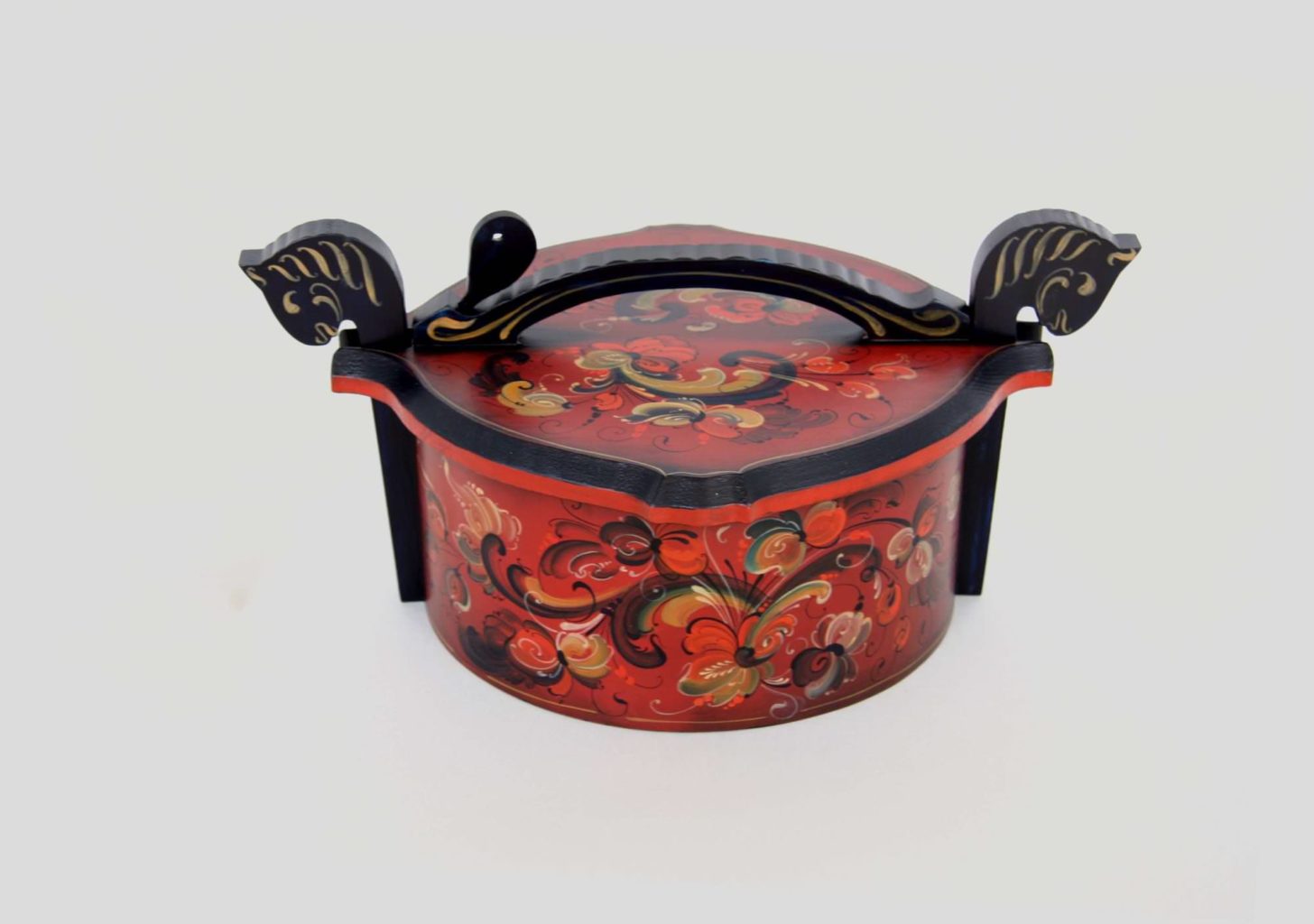 Proud to say I am a farmer’s daughter from the beautiful hills of southwest Wisconsin. Early influences were: growing up in a Norwegian-American family, Five Points Church, taking a couple of art classes, and developing a curiosity for Norway. After working my way through college, I married a farm boy and we started on an adventure that has lasted for over 43 years. We raised our two beautiful daughters on farms and we collect and restore horse-drawn vehicles. Applying line-work to the carriages and sleighs has helped my line-work in rosemaling and I still stripe many vehicles each year.

Through carriages I came to know a couple of rosemalers, Verna Theige and Dorothy Peterson. Both encouraged me to “get to Vesterheim and take classes.” My Grandma Olson had encouraged me to paint rosemaling by getting me the Pat Virch book, and I “attempted” to paint rosemaling, but needed a formal class to learn the right way. I attended Nordic Fest and watched, mesmerized, as Sigmund Aarseth painted in his flowing Telemark style and I was hooked! So in 1981, I took a class from Addie Pittelkow (who was the perfect beginner teacher), without patterns, and I was off and painting everthing I could.

Other teachers who have also influenced me include: Sigmund Aarseth, Jean Giese, Marlys Hammer, Karen Jensen, Oscar Kjetsaa, Irene Lamont, Carl Heinz Meschbach, Dorothy Peterson, Patti Goke, Judy Ritger, Nancy Schmidt, Alfild Tangen, Norma Wangsness, and Barb Wolter. But the ones who truly have influenced me are the old masters of Norway, whose rosemaling has been preserved so well.

After my girls were through college, I was able to “paint my way” to Norway several times and I enjoyed searching out great old artifacts with rosemaling in museums and private homes. I am now retired from working in flower shops and am sort of a full-time volunteer here in the Westby, Wisconsin, area. Being grandparents and traveling is a great part of being retired, also.

Of course, I belong to the Coulee Region Rosemalers, a group of great folks who share a love of painting. There are many woodcarvers in this area, so I work with them often on projects. Monroe Johnson even loaned me the tools to carve a few ale bowls and I was able to earn my Vesterheim Gold Medal with my first one. It is fulfilling to make an object and then paint it. And I still have all my fingers intact!

Since getting my Gold Medal in 2009, I still enter the National Exhibition of Folk Artat Vesterheim, and enjoy painting on old objects (or making them look old). I was thrilled to receive a couple People’s Choice awards.Vesterheim has made it possible for many people like myself to realize a dream of being a rosemaler and exploring the culture and heritage of Norway. And the best part of this venture is all the wonderful folks I’ve had the pleasure of getting to know.

I truly appreciate all the great mentors. So many have taken me under their wings, starting with Dorothy Peterson back in 1970s (I’m still there!). I think a rosemaler is a combination of all the influences absorbed. It takes a village to raise a child, and it takes a lot of mentors to create a rosemaler.