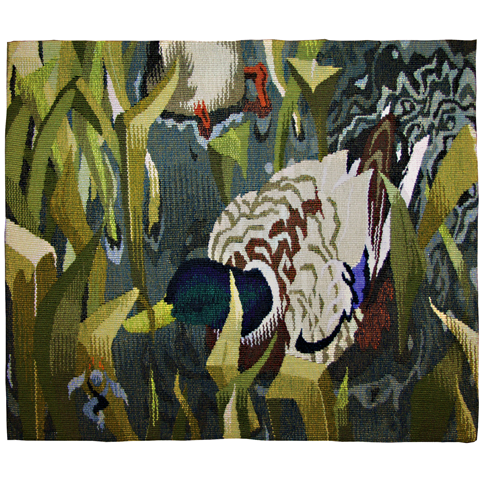 It is my goal to explore spiritual ideas, particularly relational themes, using 20th-century spatial devices evolving from studies of medieval tapestries and sacred icons. As in much post-Medieval tapestry, I see 21st-century tapestry again tending to imitate plastic media in an effort to be acceptable to “The Art World,” on Art-World terms. I oppose this and aim to develop imagery that takes advantage of the unique expressive qualities of tapestry, while also using a 20th-century understanding of the picture plane. I strive for honesty in the image as it relates to the media.

Early in my inquiry, I turned to my Scandinavian heritage. Norwegian billedvev(tapestries) offered rich possibilities for comparing Norwegian use of pictorial space with 20th-century use of pictorial space. I now believe that Norwegian tapestries have not been studied sufficiently with this in mind. They have much to teach about the understanding of early Scandinavian weavers in this area and how their thoughts expressed in tapestries were extraordinarily innovative. They challenge any concept that the 20th-century invented these spatial ideas.

Many years later, I realize my own vision has been deeply informed by these inquiries. Norwegian textiles and Lila Nelson, Past Curator of Textiles at Vesterheim Norwegian-American Museum, have been strong influences in my artwork. I have also been influenced by similar spatial ideas in African art, in music (classical and jazz, American and African) and in Ethiopian, Coptic, Russian, and Greek icons. The world is wide in this century and I engage much of it for my vision, but Norway is always special to me because it is a deep root in me.