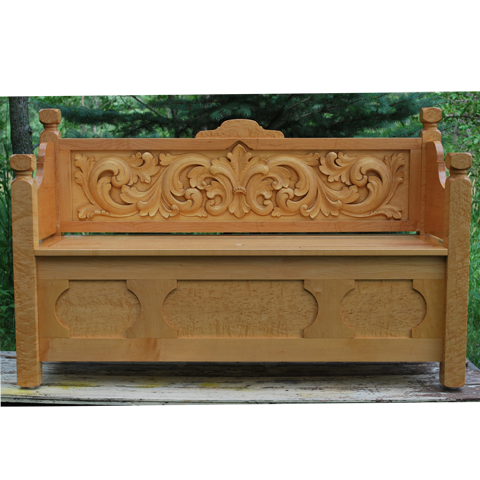 As a high school student, I worked a lot with woodworking projects, but did not try woodcarving until 1985. At that time, I took a one-week carving class with Ivan Whillock of Faribault, Minnesota. It was so enjoyable that I was soon off and running as a woodcarver. Acanthus carving was unknown to me until I saw it at Vesterheim Museum and their folk-art exhibition. It was so beautiful that I had to learn this style of carving.

I have taken classes in Norwegian acanthus carving from Knute Arnesen, Rolf Sogge, Rolf Taraldset, Grete Rudningen, and Hans Sandom. I received a Minnesota State Arts Board Grant with Hans Sandom, which was very helpful to me. I owe much of my success to Hans—he is a great carver and teacher.

Although I am not of Norwegian ancestry, their culture and art was all around me as a young person, as I was raised in a community with many Norwegian people and many of my friends were “Norwegian.” Also, I married a lady of Swedish descent, who was and still is very interested in rosemaling, knitting, and sewing: everything Scandinavian, you might say.

I consider Norwegian acanthus carving to be a great art form and I am very proud to have received a Gold Medal from Vesterheim in this carving discipline.