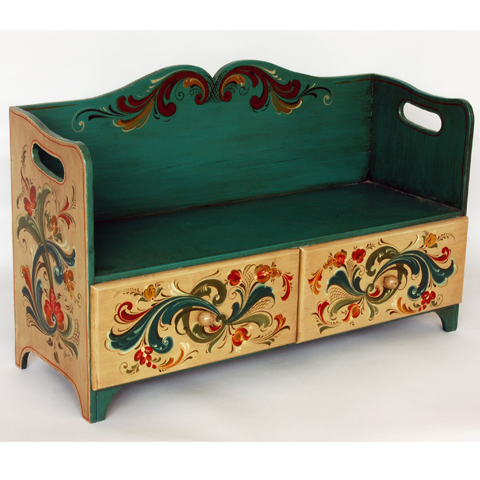 I was born in Dubuque, Iowa, on June 30, 1943. My family relocated in Platteville, Wisconsin, in 1946 where my parents raised my brother and me. After graduating from high school in 1961, I attended UW-Whitewater for one and a half years. I decided to work in the family business at that time, working as a typesetter, proofreader, doing ad layouts, and job printing for my parents’ free distribution paper, The Grant-Iowa-Lafayette Shopping News.

In August of 1967, my husband and I were married in Platteville and continued to live there and raise our three children. We have twin daughters and a son who have blessed us with 11 grandchildren.

I was introduced to rosemaling in 1969 by a good friend of our family. Aural Giese, also from Platteville, was a self-taught Pennsylvania Dutch painter who discovered rosemaling in about 1967 after purchasing a book on the subject. She taught a vocational class at the local high school one evening a week, using some patterns by Pat Virch and some of the rosemaling techniques she had learned at a Nils Ellingsgaard class in Decorah in 1968. In 1969, I visited Aural at her home studio where she showed me some of the items she had been working on. I was hooked and joined her vocational class in September of 1969. She could see potential in my work and encouraged me to enter the first Rosemaling Show in Hales Corners, Wisconsin, and also encouraged me to go to Decorah and study with Nils. That was the beginning of my journey with rosemaling. I studied with Nils several years in those early days, meeting and being in classes with Ethel Kvalheim, Vi Thode, Dorothy Peterson, Judith Nelson, Norma Splitt, and so many other wonderful painters. We had so much fun in that old classroom! One year I studied with Ruth Nordbo, and later on I took a class with Nancy Schmidt and Barbara Wolters. My primary style is Telemark, but I also painted some Hallingdahl and Valdres. I was a stay-at-home mom raising our three children during the years when I was painting the most. I had a small workshop in my basement and painted many things on consignment and for craft and rosemaling shows. The three major rosemaling shows I participated in were Syttende Mai, Milwaukee (originally at Hales Corners) and Nordic Fest in Decorah. In 1972, I received a Red Ribbon on a large sugar bucket and an Honorable Mention on a small trunk at Nordic Fest, giving me two points toward the Gold Medal. The following year, I entered a secretary and a small bookcase, receiving a Blue Ribbon on each, giving me enough points to receive my Gold Medal. In years to follow I was asked to judge several shows.

In 2001, my husband retired as publisher of The Shopping News. We moved to Florida where we lived for about 14 years. Retirement has been good to us. In 2012, we decided to move back to Wisconsin so we can be closer to family. We bought some property on John’s Lake in Wautoma, Wisconsin, tore down an old cabin and rebuilt during the fall and winter of 2014-2015. We moved into our new place in April of 2015 and have been enjoying the cooler summers and meeting new friends. We will revisit our Florida friends during a couple weeks in the winter as long as we are able. I hope to someday get my brushes out again and do some rosemaling during our long cold winters.