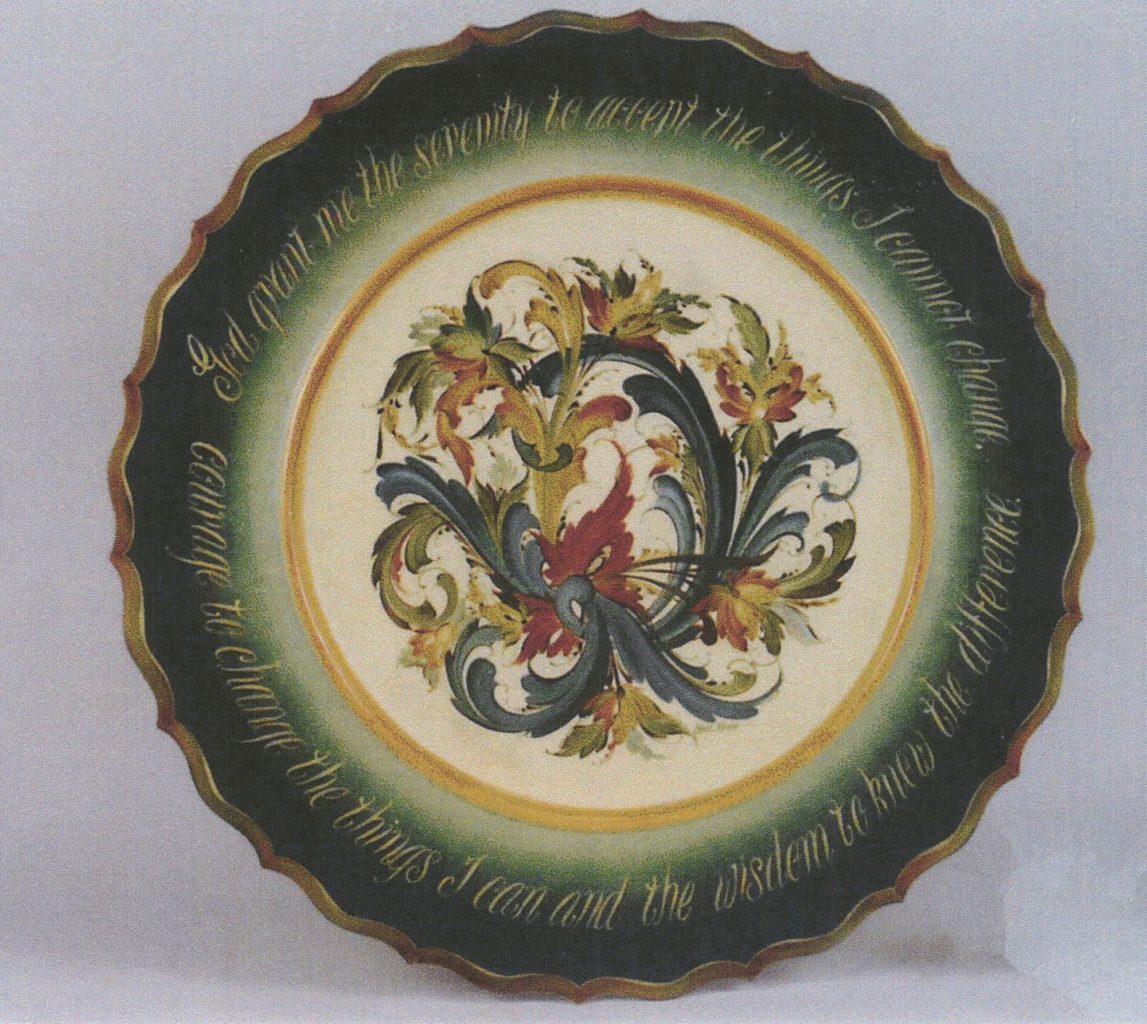 Awareness of my Norwegian heritage has always insured a love of the Norwegian arts. I first saw rosemaling while in high school. Having painted in oils since grade school, I imitated all I could find. I was most fascinated by intricate transparent Telemark scrolling.

In college, I wrote to the Norwegian government for information and was told “there is nothing, it is a dead art.” The print folios of Knut Hovde were my only inspiration for the years of starting kindergartens in Wisconsin and having my family.

I met my first rosemaler in 1969. Thelma Hines had just attended classes with Sigmund Aarseth and Nils Ellingsgard at Vesterheim. The next year began our yearly tradition of attending Nordic Fest. I never had the privilege of attending classes at Vesterheim, only having enough time to take pictures and watch demonstrations. I collected all the new books from Norway, favorite authors Aarseth, Ellingsgard, and Vesaas, and favorite old master Mevastaul.

In 1974, I was invited to teach rosemaling for the Wisconsin vocational system, which became full-time for the next 25 years. Twenty years after starting to paint rosemaling, I finally had the opportunity to take rosemaling classes. My largest influences came from Ruth Wolfgram, who taught the methods of Vesterheim’s Norwegian master painters, and Carol Dziak, who taught design. This changed my focus to constant sketching until the unconscious doodles became project designs and resulted in free-hand scrolling.

The joy of teaching and in rosemaling shows has always been participation. The object of judging at its best is against a standard, and, as we all like something different, I saw it as subjective. In 1992, I was encouraged to participate at Nordic Fest and I was honored to receive the Gold Medal in 1995.

Although I retired from teaching in 1999 to care for my mother, I continue to paint rosemaling, most recently large panels to surround a great room. My equal interest has always been researching genealogy. From 1970, Gerhard Naeseth helped me with my ancestry in the Telemark district. So Vesterheim has had a huge influence in my life, providing information, inspiration, and the opportunity to meet other Norwegians by blood or adoption. For all of this, I am grateful.