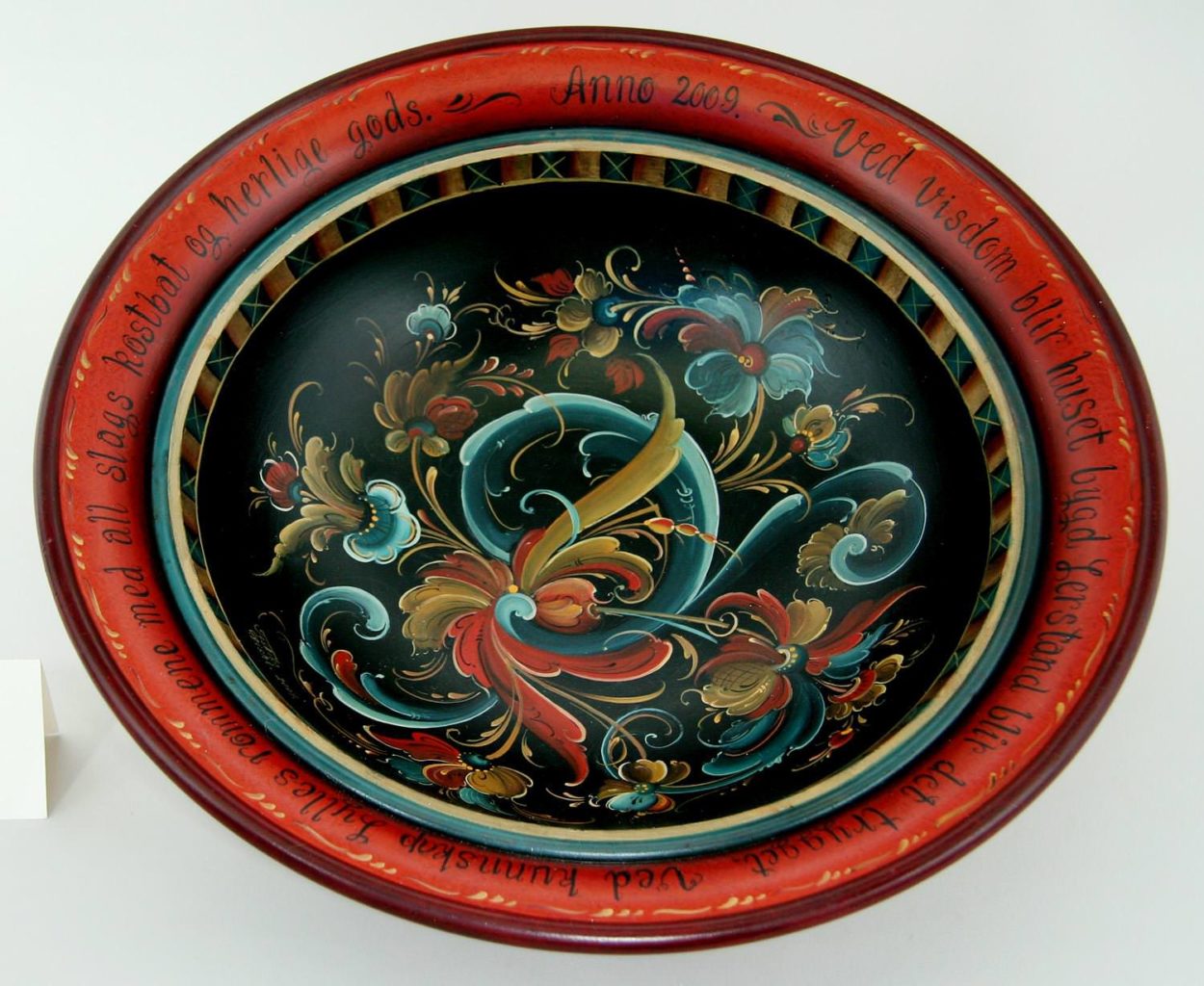 First of all, I would like to thank Vesterheim and my family and friends for their support to achieve my dream. I am so honored to receive the Vesterheim Gold Medal. My rosemaling journey started about 30 years ago. I came to Milwaukee, Wisconsin, from Tokyo, Japan, in 1976, with my husband and two-year old daughter.

I met my friend Connie, whose husband is Norwegian-American, soon after I moved to Milwaukee. A few years later we went to a rummage sale together. Here we found some hand-painted plates, painted by the lady running the rummage sale. My friend asked about the painting and the woman showed us more rosemaling inside her home. Connie knew a little about rosemaling and signed me up for a class taught by Elaine Schmidt at the Milwaukee Area Technical College. This class would lead me to where I am now. Elaine was a good teacher and I continued taking lessons from her. Life really led me to the unexpected!

Years went by and my children became old enough to learn Japanese. To accomplish this every week we went down to Chicago to attend Japanese Saturday School. I made many Japanese friends and, after explaining what I was doing with rosemaling, many of my Japanese friends asked me to teach them rosemaling. I started teaching a group of women around 1984. At the same time, I joined the Norwegian Rosemaler’s Association. I attended the Norwegian rosemaler’s seminar and the Vesterheim Gold Medalists teacher’s seminar with my students. Rosemaling shows provided another source of excitement for me and I advanced to the professional level, and then on to the Silver Palette level. Many of my students would follow me with their own achievements through these levels. I met so many great rosemaling friends such as Nancy Schmidt. It was an eye-opening experience for me and, as a result of this trip, I learned so much and my painting became more self-confident.

In 1990 the State of Wisconsin became a sister state with the Chiba Prefecture in Japan. Chiba happens to be my home county in Japan. I became the cultural chairperson for the Wisconsin side. These two states became active in many cultural exchanges, sending delegations to each other frequently over the years. Wisconsin has always chosen a rosemaler as one of their cultural assets. I was excited to participate in these events.

These events led me to start a rosemaling seminar in Japan, where the population of decorative painting has reached frenzied heights over the years. Some of my students went back to Japan to teach rosemaling, as have I twice a year for the past 20 years. I started the Japanese Rosemaler’s Association in 2008.

I may be one of the first Japanese people to learn the art of rosemaling all those years ago. I think rosemaling has so much in it. It is rich in culture, history, and art. I still have a long way to go and I appreciate Vesterheim for offering me such great opportunities. I would also like to thank all of my rosemaling friends, both here in the United States and in Japan. I have accomplished my dream.