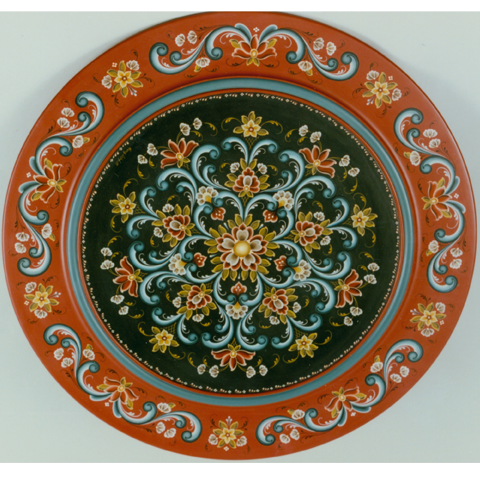 I grew up in Waukesha, Wisconsin. I majored in art and graduated from the University of Wisconsin-Whitewater in 1972 with a degree in art education. I worked for the Waukesha Freeman in advertising layout. We moved to central Wisconsin and farmed for nine years. I worked part-time there doing ad layouts. In 1977, I saw an article in a magazine on rosemaling. My mother had taken a rosemaling class. She gave me her things and said I would be better at it, so I took a class. We had a bus trip down to Nordic Fest in Decorah and there I got to see all the rosemaling. I loved it and it made me think more about my Scandinavian background, mostly Swedish. I have since collected many Scandinavian things, decorated my home more Scandinavian, gotten traditional recipes, and looked more into my family history.

I started teaching locally in about 1980 in the Rogaland style. In 1984 we moved back down to Waukesha and I got involved with the Norse Rosemalers in Milwaukee and WSRA in Stoughton. I met Vi Thode and Ethel Kvalheim there. Ethel has been a big influence and encouragement to me over the years. I first entered The National Exhibition of Folk Art in the Norwegian Tradition in 1986 and was thrilled to get a ribbon. The competition was then very hard. In 1990, after getting my Gold Medal, I took my first class in Decorah since I felt my children were finally old enough to leave for a week. Since then, I’ve taken classes from a number of Norwegian instructors including Nils Ellingsgard and have been to Norway to study.

My painting has evolved so much over the years. I now paint many styles including Rogaland, Telemark, Valdres, Gudbrandsdal, Os, and Hallingdal. I have much more to learn. I have also taken a number of classes in Acanthus woodcarving. It is a heritage I can pass down to my family.