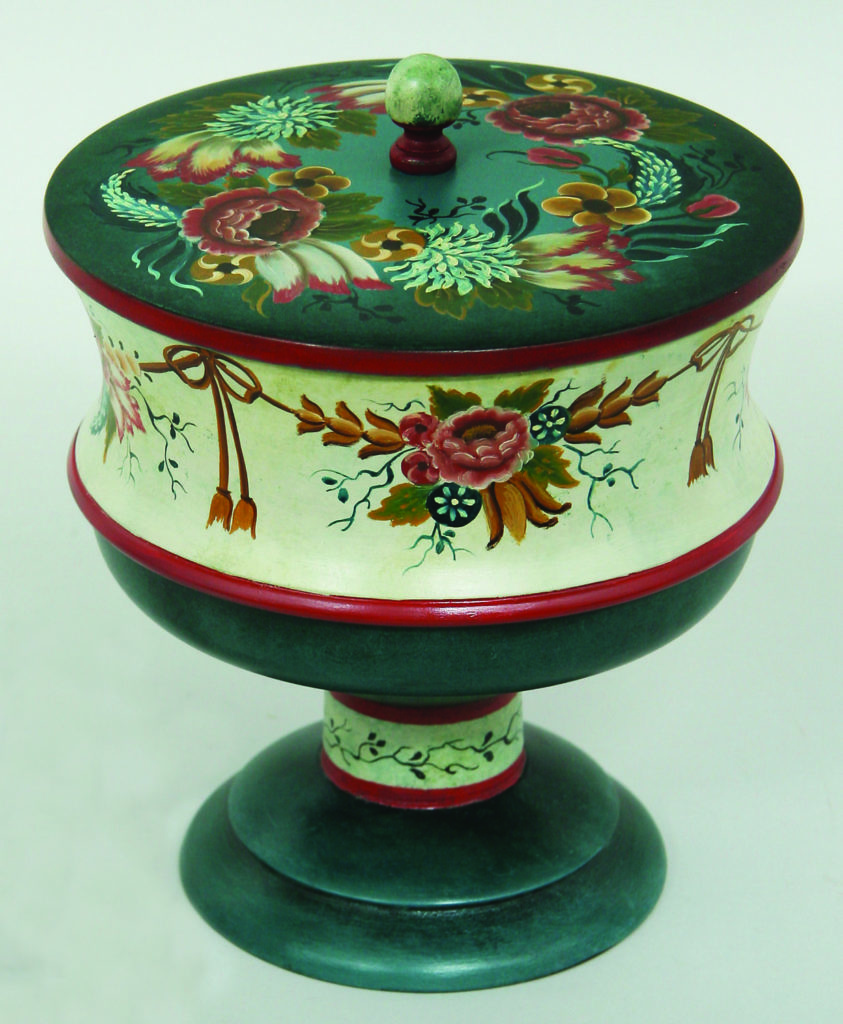 Years ago I never expected to win a Gold Medal. I painted merely for the enjoyment of it. As I took rosemaling classes and learned more about Norwegian culture, I began to think of Vesterheim as a very special place. Submitting pieces to the National Exhibition was done in part to support the museum. After all, if no one enters, there can’t be a show. It was also flattering if someone liked my pieces well enough to buy them, and sometimes they did!

In 1991, Enid Grindland became editor of the Rosemaling Letter. She expressed some concern about living a distance away from Vesterheim. Since I was entering the ‘empty nest’ stage and lived close to Decorah, I volunteered to help if needed. Soon I was writing some articles and helping to assemble the newsletter for the printer. Six years later Enid resigned and I became editor. Through researching articles, interviewing painters and reporting on events, I learned so much! The increased contact with other rosemalers was rewarding also and I truly enjoyed the position for 11 more years.

During this time I kept exhibiting, won some ribbons and taught classes at Vesterheim. The Valdres style became my favorite, although I explored others as well. The Gold Medal became a reality in 2009. It was so satisfying to culminate all my experiences in this way. It’s now hard to imagine life, past or present, without the beautiful art of rosemaling.

I am a Norwegian by marriage. It wasn’t until I became part of a Norwegian family that I even knew what rosemaling, rømmegrøt, and bunads were. It has been a great heritage to learn about and to take part in.

After an introduction to rosemaling in a community education class, I took my first Vesterheim class from Gary Albrecht. This was the first of many from several Norwegian and American painters. It was Gary who encouraged me to enter the National Exhibition at Nordic Fest. My first entry sold! How gratifying!

I learned a lot about color mixing from those first Rogaland classes and an interesting color blending technique from Oskar Kjetsaa. My introduction to the Valdres style, which became my favorite, was from Eldrid Arntzen. I also studied the Valdres style with Nils Ellingsgard, Eli Saelid, and Dorothy Peterson. In the later years I have also been exploring the Telemark and Vest-Agder styles and enjoy painting them as well.

Outstanding memories include a Vesterheim Study Tour in Lillehammer, Norway, in 1995, winning that first ribbon in 1996, and winning the last one, which culminated in my Gold Medal in 2009.

Aside from the actual painting, another experience that I truly appreciated was working with the Vesterheim Rosemaling Letter for a number of years. I learned a great deal in researching and writing articles and found that I enjoyed creative writing as well.

Rosemalers are a close-knit group and I am grateful for the many dear friends who share this common interest in Norwegian folk art. Rosemaling has indeed been a blessing.