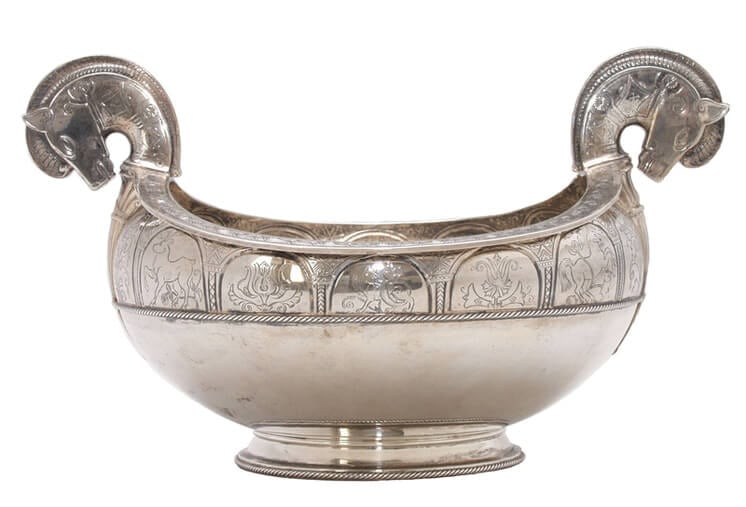 This silver bowl, in the shape of a horse-head ale bowl, was made by the David Andersen company. The features on the horses’ heads are engraved. The necks have engraved designs which include diamonds, swastikas, and flowers. (Prior to its use by the Nazi Party, the swastika was seen as a symbol of life, power, and good luck.) The rim of bowl has an engraved and repoussed decoration of fans and circles. Below the rim there is a band of engraved and repoussed designs of animals alternating with floral motifs, each surrounded by an archway. Below this band is a narrow braided rope which encircles the bowl. A similar braided rope also encircles the foot.

The marks on the bowl indicate that the bowl was made by the David Andersen Company after 1917. David Andersen founded his company in Christiania (Oslo) in 1876. He was known for his exceptional quality and high standards. The company was taken over by his son, Arthur, after his death in 1901.  The crisp, stylized ornamentation on this bowl suggests that it was created by Johan Sirnes who became the chief designer at David Andersen in 1914.

Inscription: MLC engraved on one side of bowl.