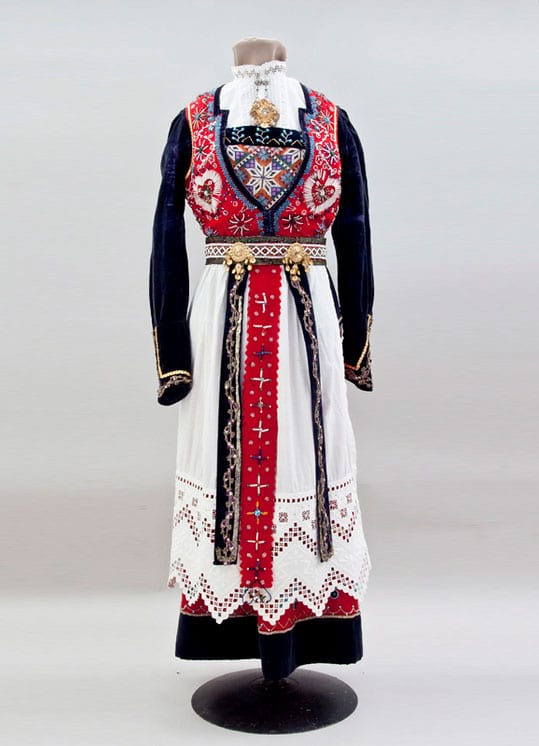 This bunad has a skirt made of red wool woven in straight twill. It is decorated with gold metallic lace and extensive bead work in blue, black, clear, and gold beads. There is an addition of blue velvet around the hem. The beaded belt has streamers that are also designed with beads and gold metalic lace.

The jacket is made of wool in the front and velvet in the back. The front section has beadwork to match the skirt. The jacket is lined with  cotton monks cloth lining. There are hook and eye closures at the waist. The front opening is filled by a separate beaded plastron that has an eight-pointed star motif and appears to be orginal in all details.

The apron is made of white cotton and buttons at the waist. There is an edge of Hardanger embroidery on basket weave cotton at the hem.

The crown is a primitive structure of wire covered with beads, tufts of red yarn, and beaded padded wool diamonds which circle the crown at midpoint.

The bunad was made by Madli Selgestad Myrlie of Hills, Minnesota, in 1912 for use in mock weddings at Hardangerlaget gatherings. At the first Hardangerlaget Stevne in 1911, Madli wore a dress and crown for a bridal procession and mock wedding. This was so popular that the Lag voted in 1912 to purchase the bride’s clothing and crown from Mrs. Myrlie use at future stevne.

Madli was born 1872 in Odda, Hardanger, Norway. She married Ole Johansen Myrlie. In 1902, they emigrated with their three children to Hills, Minnesota where they eventually had three more children.

The bunad appears to have been altered through the years, incorporating non-traditional and traditional elements.