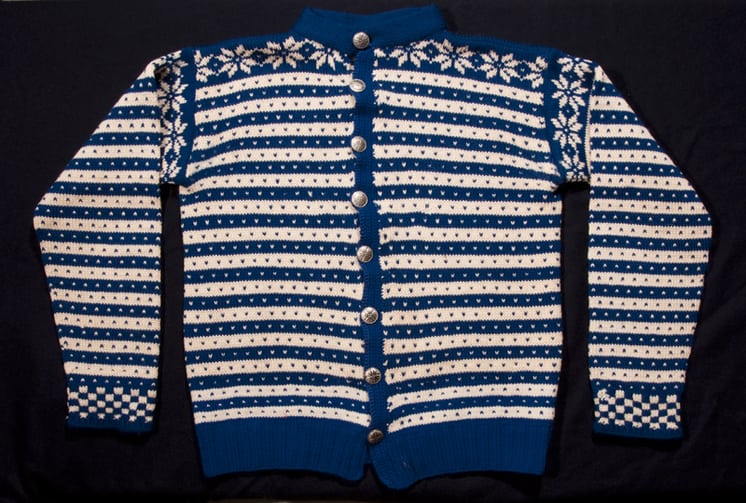 This hand-knit sweater, which is knitted in the Fana style, was worn Odd Andersen. Andersen was born in Norway in 1922. He and his mother and twin sister emigrated from Sarpsborg, Norway in December of 1924 to join his fathe who had come earlier.  The family came through Ellis Island where they were detained because Odd was ill.  When they were released, the family went on to Pequaming, Michigan, where Odd’s father, Olaf, worked as a lumberjack in Henry Ford’s forest.  Ford had the forest from about 1923 to 1933 for lumber for his cars.  Somtime around 1933, the Andersens moved to Massachusetts where they settled permanently.  Odd attended Boston Trade High School for four years, studying to be an electrician.  After a year of working a refrigeration serviceman for Coca Cola Bottling Co. in Boston, Odd enlisted in the Navy in September 1942. Odd Andersen was an accomplished skier and ski jumper. He traveled to Norway for the 1952 (Oslo)  and 1994 (Lillehammer) Winter Olympics.