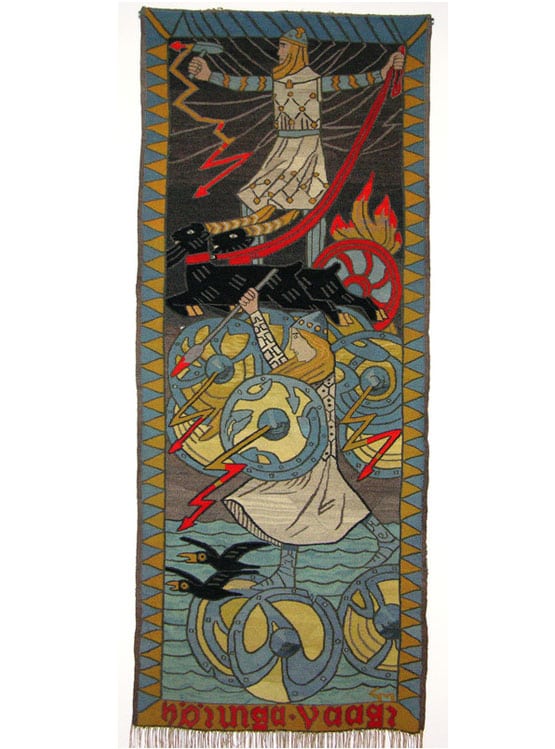 This long, narrow, tapestry has a linen vertical warp wool horizontal weft. It is executed in a flat decorative style with black outlining of details. There are single interlock and slit tapestry joins.

The design on the tapestry, which was woven by an unknown weaver, is based on the water color, Hjørungavåg, painted byGerhard Munthe, in 1908. It depicts a scene from a battle in 986 AD at Hjørungavaåg (Hareid Kommune, Sunnmøre, Møre og Romsdal) between Norwegian forces and Vikings from the Baltic Sea. The story was recorded by Snorre Sturluson, the Icelandic poet and historian, in the early 1200s. According to the legend, Earl Haakon reigned over Norway as a vassal under the King of Denmark. When the king tried to convert Haakon (who believed in Norse gods) to Christianity, tensions rose. The Danish king hired professional warriors from the island of Jom in the Baltic Sea to go to Norway and kill Haakon, or at least drive him out of the country. Haakon found out about the plan and, with his son Eirik, assembled a large army to meet the Vikings of Jom. There was a fierce and bloody battle at Hjørungavaag. It looked like the mercenaries would win, so Haakon sacrificed his youngest son, Erling, to the Norse gods to enlist their help and win the battle. Thor, who came to their aid and fought along side one of Haakon’s Norwegian warriors, is depicted in the tapestry. He is easily identified by his hammer and the chariot pulled by the two billy goats, Gnasher and Gaper.